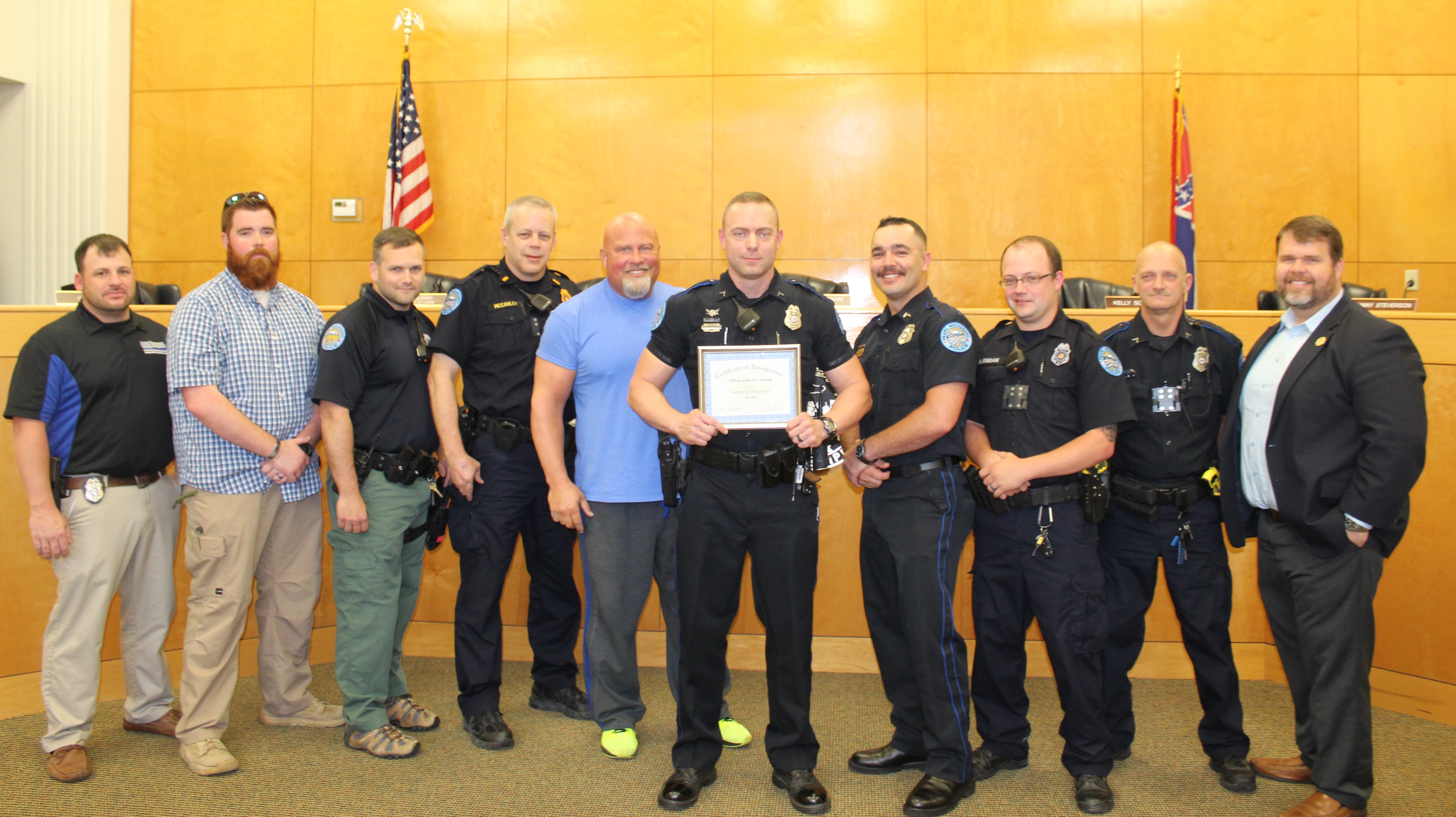 We are proud to announce that the Pearl Police Department Officer of the Month is Officer Glen Westbrook. Glen graduated from Madison Central Academy and later began working at the Rankin County jail. He graduated from MLEOTA in 2010 and went to work for the Brandon Police Department. He was hired by Pearl PD in 2016 where he has worked as a patrolman and SWAT Operator.
On Saturday evening, March 31, 2018, at approximately 8:45 p.m. Pearl Police Department received multiple calls in reference to a welfare concern of a subject seen on the side of Interstate 20 east near mile marker 50. Different callers stated the male subject was lying on the shoulder of the roadway and appeared to either be sleeping or lying down. Another caller stated there was a concern that the subject had been struck by a car. Officer Glen Westbrook was in the area headed to another call but re-routed to this call due to the concern of the pedestrian near the roadway being higher priority. Upon Officer Westbrook’s arrival to the area, he passed the subject in question and quickly pulled to the edge of the roadway before exiting his car and walking back toward the subject. As Officer Westbrook made his approach toward the subject lying on the ground, he walked toward headlights of motorists traveling eastbound in excess of 70 mph. When Officer Westbrook was within range of the male subject, he noticed the subject to be moving but unable to see his hands. Officer Westbrook began numerous commands for the subject to show him his hands. After repeated commands, the subject drew a gun and pointed it toward Officer Westbrook, discharging his weapon toward the Officer. Officer Westbrook returned fire at the subject striking the subject as additional units responded to the area for assistance. The subject was quickly taken into custody and first aid was rendered to the suspect at the scene. The suspect was transported to a local hospital for evaluation and just after being released was booked on aggravated assault on a police officer, discharging a firearm in the city, and exhibiting a weapon. He has since been presented to the Rankin County District Attorney’s office where a true bill was reached and an indictment forthcoming of simple assault on a police officer by physical menace. He remains in the custody of the Rankin County Jail
Officer Westbrook’s enhanced training, precision skills, and quick thinking ended a potential threat not just to himself but as well as the many motorists that were traveling Interstate 20 at the time of this incident as well as residential areas parallel with I-20. This article could very well be an obituary but instead an officer went back to his shift, a community was kept safe, and a daddy and husband went home to his wife and 4 children. We are grateful and appreciative for Officer Glen Westbrook and present him as Pearl Police Department’s Officer of the Month. Lieutenant Brian McGairty