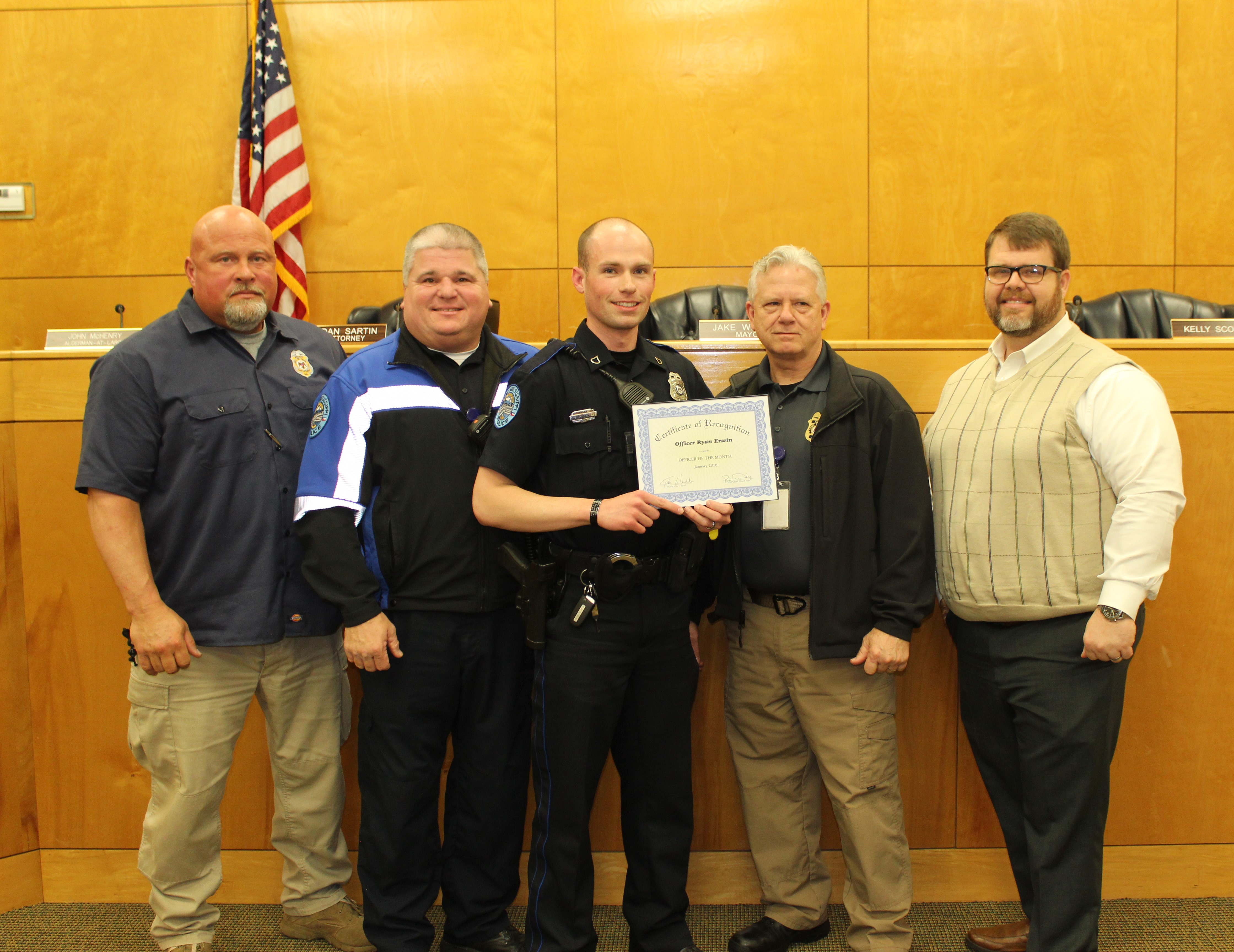 We are very proud to announce that the Pearl Police Department Officer of the Month is Officer Ryan Erwin. Ryan is a 2010 Pearl High School graduate and graduated from the University of Mississippi and the Mississippi Law Enforcement Officers’ Training Academy in 2015. Officer Erwin served in the Army National Guard and was deployed with the 113th Military Police Unit in 2011 under Operation Enduring Freedom on the border of Kuwait and Iraq. Ryan and his wife Kristin live in Pearl and have a 4 month old baby boy named Lewis.
On November 28, 2017 Officer Erwin overheard on radio traffic that a stolen trailer was entering the city limits of Pearl. He spotted the trailer on Hwy 80 and detained the male subjects that were occupying the vehicle. He also learned from the Clinton Police Department that the tag was stolen. Through the investigation it was learned that the trailer was stolen 3 years ago from Bogue Chitto, Mississippi. Clinton PD Investigators were able to use the information in Officer Erwin’s traffic stop to aid in their investigation. A search warrant was obtained for an address in Jackson where parts from the stolen trailer were found. Other arrests were also made that led to the closure of a grand larceny case in our jurisdiction. If it had not been for Officer Erwin investigating further than the initial probable cause, several cases would still remain unsolved. Officer Erwin goes above and beyond his duties as a Patrol Officer and is a true asset to the city of Pearl and the Pearl Police Department.
The Pearl Chamber of Commerce presented Officer Erwin with a framed certificate, a $100 Bass Pro Shops Gift Card and a Cracker Barrel Gift Basket that includes a complete meal for two people. Great American Cookie donated a cookie cake; Cavender’s Western Wear donated a $75 Gift Card; The Pearl Municipal Credit Union donated a $25 Visa Gift Card; Moss Creek Fish House donated a $25 Gift Card; Jose’s Mexican Restaurant donated a $25 Gift Certificate; Eclipse Nutrition donated a $25 Gift Certificate; McAlister’s Deli donated two complimentary meals; Focus Fit donated a FREE month’s pass and Scotts Miracle Gro donated a Fit Bit. Kristin Erwin Ryan Erwin